Miscarriage – What Is About the Emotional Pain?

The anticipation about the childbirth, plans about life with the baby, dreams about having a family. All of this goes along with being pregnant, but there are also scenarios, in which the unborn baby does not survive. It comes to a miscarriage: The child dies before it is survivable. Medics call it miscarriage until a weight of 500 gram, but emotional pain cannot be weighted in gram, because his heaviness is endless. What remains is grief, pain, and the feeling of isolation. Why do miscarriages happen? And how to get back to psychic well-being?

Not many people talk openly about the topic miscarriage. That is why it seems as if someone is alone with this stroke of fate and, that miscarriage does not happen often. This is not the case: Miscarriages happen very often. Experts consider that about two-thirds of the fertilised eggs die off or they do not grow appropriate. Miscarriages happen in an early phase; that is why they are often not noticed. Extraordinarily strong or belated menstruation could be the first sign.

What are the symptoms of a miscarriage?

In an advanced stage of pregnancy, the risk of miscarriage decreases. From the 15th week of pregnancy on (depending on the age) the risk is only between 1 and 3 per cent .

If a weak cervix causes a miscarriage, some do not feel pain or even labour in the beginning. This kind mostly happens in the first trimester (from the 13th week of pregnancy). A miscarriage could also happen without those symptoms and by being noticed at random through an ultrasound.

A gynaecologist checks the general well-being, measures body temperature, blood pressure and pulse . After this follows the control of the cervix . The doctor checks if it is open or closed and examines the uterus. In a final ultrasound examination, the gynaecologist ensures, if the heart of the unborn is beating.

What are the causes of a miscarriage?

The specific reasons for a miscarriage are not fully clear and vary from case to case. You must be aware that it is not your fault and that you feel the pain and go through it.

Malformations of the uterus or infections

In the first case, it comes to a miscarriage caused by a “double uterus”, or a uterus didelphys. In the uterus, there is a separation caused by a wall (septum). When an embryo implants to the septum it is not supplied with enough blood. Infections mostly cause late abortion. Examples for it are bacteria like chlamydia, b-streptococci, viruses like rubella or herpes, and protozoa.

What are the risks for a miscarriage? 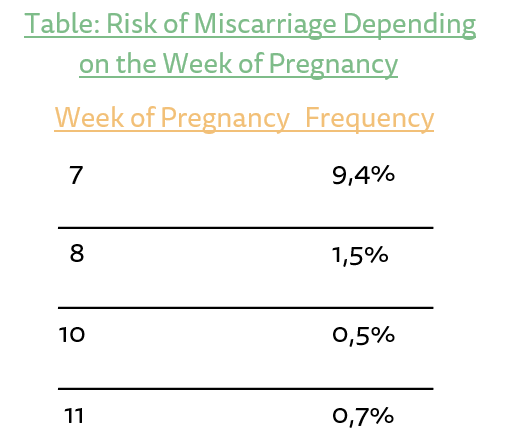 After which time is it possible to get pregnant again?

Scientists found that the chance of getting pregnant again immediately after a miscarriage is not decreased. So, it would be possible to get pregnant again after a normal cycle including menstruation. Nevertheless, it would help if you got over the stroke of faith first. Not just your uterus needs time to heal, also your psyche.

What to do after a miscarriage?

To lose an unborn child is incredibly stressful: Physical, emotional, and mental. Take the break that you need. Talk to a close person, who you trust. Be open to your partner and treat one another with awareness. No matter, which emotions you feel: All of them are right and important. Take them seriously. Just who is feeling what is there can overcome it. Maybe you do not feel understood by your close ones . Many women share this stroke of faith – look for self-help groups, be creative, meet other people, if it helps your well-being .
A lot of women drown in feelings of guilt, although there is no reason for it. If you notice long-lasting depressive feelings within yourself, do not feel ashamed to seek professional help. For many people the loss of an unborn, and with it hopes, dreams and visions, is a traumatic life event. Take yourself serious in your situation and mourn your loss.

The articles in the Instahelp online magazine build on personal stories and experience. We want to give our writers the freedom to express their own thoughts. This means that the articles are an expression of the authors’ own opinions and don’t necessarily reflect the opinions of Instahelp.