Trypophobia: Fear and Disgust of Holes and the iPhone

Caroline does not have any problems in her daily life, but as soon as she sees a collection of small holes, or cracks, she feels queasy. She feels anxious, stressed, and disgusted and she must look away. An example of it would be a honeycomb, but it could also be triggered by a cracked wall. The iPhone 11 and iPhone 12 with its three cameras on the back could also cause such a reaction. If someone is afraid of small holes, more precisely a collection of it, it is called trypophobia. What you can do about it and what are the causes of it? Read more about it in this article.

What does trypophobia mean?

Even, if Caroline feels fear and disgust when seeing a collection of small holes, trypophobia is not defined as an illness. The translation of the term indeed means “fear of holes” and it is only known for some years now. The design of the iPhone 11 caused, that it is found more often on the internet. People who know how the design looks like know, that there is a triple camera on the back. Persons, suffering from trypophobia, do not see this. Instead, they see three black holes which cause disgust, if not stress, in them.

Which kind of holes trigger fear or disgust in people, suffering from trypophobia differs. Objects that cause it could be Natural objects, like corals, or beehives, as well as synthetic things, like bursting bubbles, or clothes with dots. Cleaning sponges or aerated chocolate could also cause disgust, and as the iPhone 11 had shown, also technical objects could be a trigger. If trypophobia would be defined as a mental disease, it would be an anxiety disorder or a phobia. Do you already now how much fear there is in your mind?

What are the symptoms of trypophobia?

Every time Caroline is confronted with a collection of small holes, she shows the same symptoms as someone with a specific phobia:

The graphic shows the physical symptoms of trypophobia: 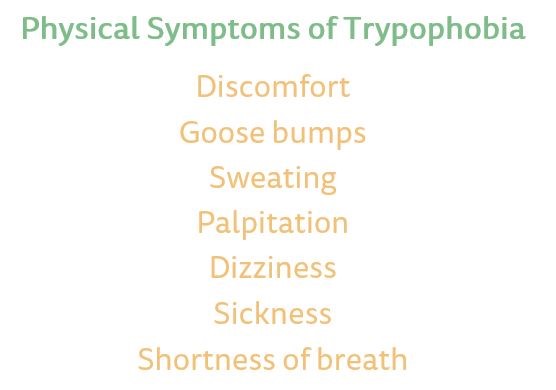 What are the causes of the fear of small holes?

Caroline already did a lot of research to find out, where her fear of small holes comes from. Although the phenomenon is not completely understood, there are some studies about it. Scientists of the University of Essex (UK) found the following: Patterns, that trigger anxiety symptoms are like those on different toxic animals. Therefore, trypophobia could have an evolutionary cause. To say it short: Specific patterns suggest danger and cause an escape reflex.

A study of the University of Kent had another theory. It assumes that people are afraid of a collection of small holes because they remind them of some diseases. Because some diseases, like measles, or pox show similar patterns on the skin surface. That is why affected people unconscious could be afraid of those illnesses. Did you already know the difference between fear and anxiety disorder?

What can you do about trypophobia?

If someone is restricted in daily life because of the fear of small holes, it would be a good idea to get help from a psychologist or therapist.  The therapy method that helps very well, for example, is behavioural therapy. In this therapy method, an expert helps you to confront yourself to the  triggering stimulus more and more. In the case of trypophobia is objects with holes or pictures from it. Relaxation techniques also help. You can learn them by yourself, or within a therapy. Furthermore, you could try to actively confront yourself with your fear. Here you can read, how this is possible.

The fear of holes might sound funny to outsiders, but for affected people, it is a serious thing. Although there is no medical diagnose yet: If you do not feel well in your daily life anymore, get yourself support. Each person has different things that cause negative emotions and for each problem, there is a solution.

The articles in the Instahelp online magazine build on personal stories and experience. We want to give our writers the freedom to express their own thoughts. This means that the articles are an expression of the authors’ own opinions and don’t necessarily reflect the opinions of Instahelp.